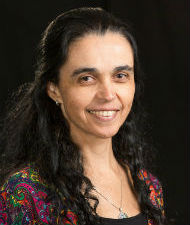 She is mainly known for her work in compact and fossil groups and specifically for the study of the internal kinematics of galaxies using Fabry-Perot instruments, as well as for acting in astronomical instrumentation.

She did a postdoctoral internship at the Institut d'Astrophysique de Paris (1993), was a fellow at the European Southern Observatory in Chile from 1994 to 1995. She was a visiting professor in 1996 and 2004 at the Universitäts-Sternwarte München, at Max-Planck-Institut für Extraterrestrische Physik in Garching, Germany, with a grant from the Alexander Von Humboldt Foundation, at the Universidad de La Serena, Chile, with a CONYCIT grant, and in 2018 at the University of Florida, with a FAPESP grant.

She leads the S-PLUS project (Southern Photometric Local Universe Survey, www.splus.iag.usp.br), about a Brazilian robotic telescope in Chile which is mapping a large area of the southern sky, and is the principal researcher for the GMT Brazil project, about the construction of the 25m Giant Magellan Telescope in the Chilean Andes. Since 2020, she has been a member of the São Paulo State Academy of Sciences and the Brazilian Academy of Sciences.