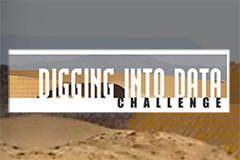 The Sao Paulo Research Foundation (FAPESP) and fifteen other international research funders today jointly awarded approximately $9.2 million to international teams investigating how large-scale computational techniques may be applied to answering research questions in the humanities and social sciences. These teams will be pursuing research in numerous areas, including musicology, economics, linguistics, political science, and history.

Each of the fourteen winning teams is composed of researchers from multiple scholarly and scientific disciplines, working collaboratively to demonstrate how cutting-edge big data techniques can be used to investigate a wide range of research questions across the humanities and social sciences.

The T-AP Digging into Data Challenge is sponsored by research funding organizations from eleven nations, organized under the auspices of “T-AP,” the Trans-Atlantic Platform for the Social Sciences and Humanities . T-AP is an unprecedented collaboration between key humanities and social science funders and facilitators from South America, North America and Europe. T-AP aims to enhance the ability of funders, research organizations and researchers to engage in transnational dialogue and collaboration.

One of the 14 proposals selected involves researchers affiliated to institutions of higher education and research in the State of São Paulo in partnership with researchers from other countries, as indicated below:

Abstract: A collaboration among an international team of folklore scholars and computer scientists to develop analytical techniques for studying folkloric traditions across multiple national databases.

Abstract: A collaboration among an international group of economists using online prices, available from the Billion Prices project at MIT, to study standards of living across countries.

Abstract: An international collaboration among linguists and speech experts to study child language development across nations and cultures to gain a better understanding of how an infant’s environment affects subsequent language ability.

Abstract: A collaboration among scholars of media studies, communication, and political science to study the history of media coverage of terrorist attacks and to gain a better understanding of how such coverage can be done in a responsible manner that does not provide aid to terrorists.

HJ-253504. THEMIS.COG: Theoretical and Empirical Modeling of Identity and Sentiments in Collaborative Groups .

Abstract: An interdisciplinary research project on the motivations of self-organized collaborations and determinates of their success, through a large-scale study of the scholarly networks and open source software development projects housed on the GitHub repository. The project team includes scholars from sociology, cognitive science, computer science, and engineering.

HJ-253524. Mapping Manuscript Migrations: digging into data for the history and provenance of pre-modern European manuscripts .

Abstract: An international collaboration mapping the movement of pre-modern European manuscripts. The project links disparate datasets from Europe and North America to provide a view of the history and provenance of these manuscripts.

Abstract: An innovative international collaboration to study Relaciones Geográficas, a 16th century compilation ordered by the Spanish crown that gathered vast amounts of information about the New World through multiple records, both in Spanish and indigenous languages. Using a Big-Data approach, this project applies novel computational methodologies to study this important source for the colonial history of America.

HJ-253529. SPeech Across Dialects of English (SPADE): large-scale digital analysis of a spoken language across space and time .

Abstract: A research collaboration to develop and apply user-friendly software for large-scale speech analysis of 43 existing public and private speech datasets and to understand how English speech has changed over time and space. These diverse datasets are comprised of both Old World (British Isles) and New World (North American) English across an effective time span of over 100 years.

Abstract: A project bringing together scholars from economics, business, and computer science to study the emergence of computerized high-frequency trading and its impact on global equity markets.

Abstract: An international collaboration of library and information scientists studying how Linked Open Data, a technique for publishing online data, can improve storage methods for humanities and social science data. Projects in musicology and economics will serve as use cases for this research.

Abstract: An international collaboration to explore the dynamics of social actions based on traces left by social media. Focusing on opinion diffusion and language evolution, this project brings together an interdisciplinary team with expertise in data science, physics, linguistics, philosophy and law.

Abstract: The study of influence and sharing among musicians through a computational analysis of jazz recordings and related resources.