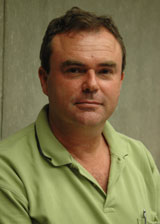 Bachelor's degree in Biological Sciences at University of Campinas - UNICAMP (1982), master's degree (1987) and Ph.D. (1991) in Ecology at University of Campinas. Professor of Zoology at São Paulo State University - UNESP, Rio Claro and currently Professor of Vertebrates at this institution (2001). Has experience in the areas of Zoology and Ecology, working mainly with taxonomy, systematics, phylogeny, evolution, behavior, and conservation of amphibians.

Member of the Coordination of the Biota / FAPESP Program, from 2009 to 2012 and Coordinator of the Advisory Committee of Zoology - CA-ZO of National Council for Scientific and Technological Development (CNPq) from 2010 to 2013. Research Associate at the Museum of Vertebrate Zoology, University of California, Berkeley. Visiting Professor at Cornell University, USA (2013). Curator of the Amphibian Collection (CFBH) of UNESP, Rio Claro, São Paulo. Foreign Honorary Member in herpetology at the American Society of Ichthyologists and Herpetologists.