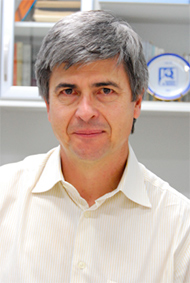 Vice-president - Board of Trustees

Professor Pilli got his BSc degree in Chemistry from the University of Campinas (UNICAMP), in 1976, and his PhD degree, in 1981, from the same institution. After a postdoctoral stint at the University of Califórnia, Berkeley (1982-84), he started indepedent research in Campinas on the stereoselective synthesis of natural products and pharmaceutical active ingredients. He was a visiting scholar at Georg-August Universität, Göttingen, Germany (1994) and at Warwick University, UK (2005).

Holds a full professorship at Institute of Chemistry, UNICAMP and a research fellowship (level 1A) from Brazilian National Research Council (CNPq)

He was awarded the Silver Jubilee Award from International Foundation for Science, Sweden (1999), the National Order of Scientific Merit (2006), the Zeferino Vaz Award for Academic Recognition from UNICAMP in 2008, the Simão Mathias Medal, from Brazilian Chemical Society (2012), the Brazilian Medicinal Chemistry Symposium Award (2014) and the 3rd Iberoamerican Symposium Award, in 2016.

His current research interests are on the total synthesis and biological evaluation of natural products and analogues as well as scientifc outreach programs.