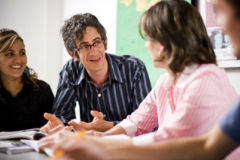 The Newton Fund-aided opportunity has selected eight workshops that shall be carried out in São Paulo until early 2021 in a joint effort between São Paulo and UK researchers (photo: Mat Wright / British Council)

The São Paulo Research Foundation (FAPESP) announces the result for the 2019/20 edition of the Research Links call for proposals. Researcher Links, a platform for fostering international collaboration through the promotion of scientific workshops, is an initiative from the British Council – the UK gov-linked institution for the promotion of culture and scientific research in global scale, which has an agreement signed with FAPESP.

The opportunity resulted in eight selected proposals, which will receive funding from FAPESP and from the Newton Fund in Brazil. The approved workshops shall be carried out in São Paulo State between February 1 and January 31, 2021, in English, with duration of three to five days.

The workshops will be coordinated by two leading researchers: one from a UK institution, and one working in a higher education or research institution in the State of São Paulo. The events are aimed at early career researchers from UK and São Paulo (12-17 from each country/region) with a PhD obtained not more than 10 years prior to the workshop.