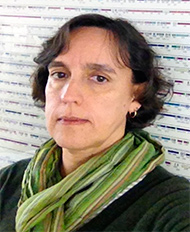 Mariana Cabral de Oliveira received a bachelor’s degree in Biological Sciences (1988) and a doctoral degree in Botany (1993) both from the University of São Paulo (USP). From 1991 to 1992, she was a visiting researcher at the Canadian National Research Council Institute for Marine Biosciences.

Dr. Oliveira has worked since 1994, at the Institute of Biosciences (Botany Department) of USP, becoming a full professor in 2015.

In 2000, Dr. Oliveira received the São Paulo State Medal of Scientific and Technological Merit, awarded by the governor, and the Claudia magazine Award, both for her contribution to the Xylella fastidiosa Genome Project. In 2003, she received the International Foundation for Science Jubilee Award.

Dr. Oliveira works in Phycology and molecular biology, focusing mainly on the following topics: biodiversity and evolution of algae and bacteria.