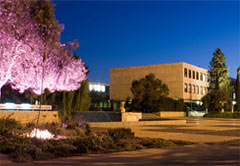 FAPESP and the Hebrew University Jerusalem selected proposals for the interchange of researchers (photo:WIkimedia)

FAPESP and the Hebrew University Jerusalem (HUJ) announce the result of the call for proposals issued under a cooperative agreement between the institutions.

Five proposals for scientific cooperation between scientists in São Paulo, Brazil and in Israel within the scope of the Scientific Cooperation Agreement between FAPESP and HUJ were selected.

The Call for Proposals was open to proposals in all fields. The duration of the proposed research project should be up to 24 months.

FAPESP and HUJ expect to fund approximately 5 proposals each one with a total cost (sum of cost to FAPESP and cost to HUJ) of around US$ 100,000.

More information is available at www.fapesp.br/en/huj