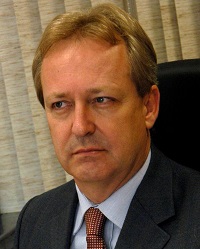 Since 2004 he is full professor at the Dept. of Computational Mechanics from the School of Mechanical Engineering at the University of Campinas (Unicamp). His research interests have been linked to the development of analytical and numerical tools to model the propagation of waves in unbounded domains.

Prof. Mesquita was head of the Department of Computational Mechanics at (Unicamp) for two terms. He did coordinate the Graduate Programs at the Unicamp’s School of Mechanical Engineering for one term. From 2009 to 2013, during the administration of Prof. Fernando Costa, he was vice-president for graduate affairs at Unicamp.

He is member of the ASCE-EMI (American Society of Civil Engineers – Engineering Mechanics Institute) and chair of the ASCE EMI Elasticity Committee (2013-2015). Since 2008 he has been a member of FAPESP Scientific Coordinations, first as a member of the Engineering Area Coordination, and later migrating to the Adjunct Coordination - Special Programs and Research Collaborations. In this role, since 2022 he represents FAPESP as Executive Secretary of the Global Research Council (GRC), a virtual organization composed of science funding agencies from around the world, dedicated to promoting the sharing of data and best practices.