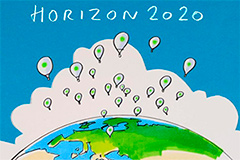 Collaborative research will cover all fields and research proposals in São Paulo can be submitted at any time, following the H2020 deadlines

The São Paulo Research Foundation (FAPESP) announces the first opportunity for collaborative research under its cooperation agreement with the European Union (EU) for the Horizon 2020 (H2020) program.

H2020 proposals can include researchers, academic and non-academic institutions (including enterprises) from countries outside the European Union.

Researchers eligible for funding by the São Paulo Research Foundation (FAPESP) can use the normal modes of funding offered by the foundation to support their participation in H2020 proposals.

FAPESP will receive proposals associated to H2020 proposals at any time, but following the deadlines for H2020 calls. Please note that H2020 has its own deadlines, which must be met by the proponents from the EU.

The proposals submitted to FAPESP must be written in English and follow the guidelines for the particular funding line (Thematic Project, Regular Project, and Young Investigator Award) chosen by the proposer. The proposals must be submitted through the FAPESP SAGe system.

The budget requested from FAPESP must be compatible with the norms of the chosen FAPESP funding line. There is no obligation of 50% / 50% FAPESP/EU funding, or any other percentage.

The call for proposals is available at: www.fapesp.br/9775.