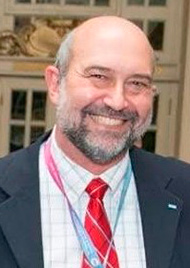 Dr. João Luiz Azevedo studied Aeronautical Engineering at Instituto Tecnológico de Aeronáutica (ITA), from 1977 to 1981. He received his M.S. and Ph.D. degrees in Aeronautics and Astronautics Engineering from Stanford University, respectively, in 1983 and 1988.

Currently, he is a Senior Research Engineer at Instituto de Aeronáutica e Espaço (IAE), at the Brazilian Aerospace Technical Center (DCTA), and an Adjunct Professor at ITA. He works in Aerospace Engineering, with major research interests in computational and unsteady aerodynamics, computational aeroelasticity and computational fluid dynamics (CFD).

Dr. Azevedo was the Director for Space Transportation and Licensing of the Brazilian Space Agency (AEB), from 2004 to 2008, and Technical Vice-Director of the Alcantara Cyclone Space (ACS) Binational Enterprise, from 2008 to2009. He was also the President of the National Council for Scientific and Technological Development (CNPq) from January 2019 to April 2020.

He is a Fellow of the American Institute of Aeronautics and Astronautics (AIAA). He is a member of the AIAA Applied Aerodynamics Technical Committee, since 2004, and member of the AIAA International Activities Committee and of the AIAA Editorial Advisory Board of the Educational Book Series, since 2009. He was the Scientific Director of the Brazilian Society of Mechanical Sciences and Engineering (ABCM), in the 2015–2017 administration of ABCM. He is also a member of the Executive Committee of the International Council of the Aeronautical Sciences (ICAS), since 2012, and he is currently the Chair of the Program Committee of ICAS. He is a Member of the Brazilian National Academy of Engineering (ANE) since 2017.