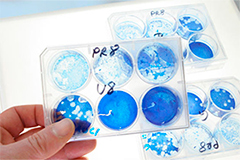 FAPESP initiative will fund the mobility of researchers from the State of São Paulo to institutions abroad (photo: Un. Münster)

The call for proposals has the purpose of promoting the engagement of researchers affiliated with higher education and research institutions in the State of São Paulo in partnership with researchers abroad in order to: further develop qualitatively the ongoing research projects and work cooperatively, aiming at the elaboration of joint research projects for medium and long term.

The call was also opened to proposals from researchers whose partners are from institutions that did not applied for this edition or with those that FAPESP does not have a current agreement.

Proposals in partnership with researchers whose institution does not have a current Agreement for Collaboration with FAPESP (SPRINT call for proposals item 2.2):

Proposals in partnership with researcher whose institution has a current Agreement for Collaboration with FAPESP, but it is not joining the current SPRINT edition: