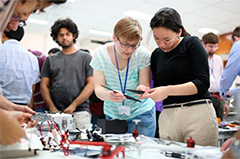 Two proposals for workshops co-organized by researchers from the United Kingdom and Brazil were selected (foto: British Council)

The São Paulo Research Foundation (FAPESP) and the British Council announce result of call for proposals issued in April, 2017, at the scope of the cooperation agreement among both institutions.

The initiative takes place inside the scope of Researcher Links program, funded by the Newton Fund.

The call for proposals is published at: www.fapesp.br/10910.