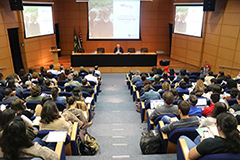 Institutions will fund a workshop about dark matter, dark energy and galaxy formation with researchers from the State of São Paulo and Japan (photo: FAPESP)

FAPESP and the Japan Society for the Promotion of Science (JSPS) announce the result of a call for proposals for the organization of workshops, launched under the memorandum of understanding signed by the institutions.

This is the fifth call in the story of FAPESP-JSPS cooperation agreement, whose goal was to select joint workshops, fostering the collaboration between young researchers from the State of São Paulo and from Japan and providing career development opportunities.

One workshop proposal was selected to be carried out for three consecutive days at some date to be scheduled in the period between September 1st 2018 and March 31st 2019. The event will be jointly organized by one São Paulo State coordinator and one coordinator from Japan. The event’s venue will be located in the state of São Paulo.