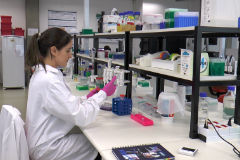 FAPESP announces the result of a call for proposals for British researchers to visit research groups in the State of São Paulo (photo: Daniel Antonio / Agência FAPESP)

The São Paulo Research Foundation (FAPESP) announces the result of call for proposals which aims to stimulate scientific collaboration between researchers from the State of São Paulo and the United Kingdom, through the Visiting Researcher Award.

The Visiting Researcher Program offers full or partial support for the hosting of experienced investigators, associated with foreign research institutions, who will work in a research institution in the State of São Paulo for a period from 2 weeks to a maximum (non-extendable) period of 12 months. The visiting researcher must hold PhD degree and have an outstanding record of scientific accomplishments.

This Program aims to promote collaboration between investigators in the State of São Paulo and their colleagues abroad for the development of ongoing research projects or for assisting the launching of new collaborations.

The Newton Fund is an initiative of the British government that aims to promote the social and economic development of partner countries through research, science and technology. The call for proposals: www.fapesp.br/en/12207.