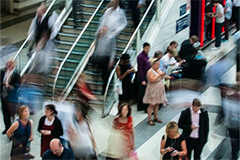 The São Paulo Research Foundation (FAPESP) announces the São Paulo State researchers with selected proposals in the 2018 call for proposals issued by the Trans-Atlantic Platform (T-AP) in Social Sciences and Humanities.

FAPESP took part in the call for proposals together with research funding agencies from other seven countries – Canada, Finland, France, Germany, Netherlands, Poland and the United Kingdom. FAPESP is one of the three agencies that coordinate T-AP (alongside SSHRC – Canada and NWO – Netherlands).

The opportunity had “Social Innovation” as its main subject, and selected only proposals written by teams featuring members from at least three of these countries and partners from both sides of the Atlantic.

The call sought to foster projects that could develop the key characteristics of Social Innovation such as creation of social value through new or improved policies; the goals of social cohesion; individual and collective empowerment and wellbeing, among others.

Accordingly, São Paulo State researchers will integrate international scientific collaboration networks, and will work closely with advanced research and multifaceted approaches for the designing of public policies and different forms of social organization – which can be traced to the multidisciplinary knowledge derived from the intersection between technological innovation and studies on human societies’ challenges for the 21st century.

“This was a very competitive call for proposals, with projects covering a wide array of subjects related to the theme of Social Innovation. TA-P partners took almost two years from discussing the scientific scope to developing the call for proposals and announcing this result, including two stages of rigorous scientific evaluation. The fact that FAPESP is present in half of the approved projects shows the quality of research produced in the State”, said Claudia Bauzer Medeiros, member of FAPESP/TAP’s Steering Committee.

"FAPESP’s participation in the coalition of research funding agencies Trans-Atlantic Platform (T-AP) in Social Sciences and Humanities has been allowing researchers from the State of Sao Paulo to forge new interdisciplinary and high quality international alliances. Research funded by FAPESP generate all kinds of impact – social, economic and intellectual. In this call for proposals, in particular, social impact was especially valued”, said Carlos Henrique de Brito Cruz, FAPESP’s Scientific Director.

Social Innovation through Participatory Art and Design with Youth at the Margins: Solutions for Engaging and Empowering Youth with Trans-Atlantic Mirroring:

More information about the call: www.transatlanticplatform.com/social-innovation.