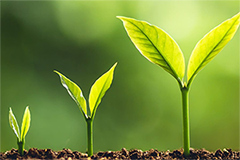 "Plant-bases protein improvement for human consumption" is the theme of the Crops of the Future Collaborative consortium's opportunity (photo: FFAR)

FAPESP launches the first call under the Crops of the Future Collaborative consortium under the theme "Plant-bases protein improvement for human consumption".

Since May 2018, FAPESP has joined companies and research institutions in several countries as a constituent part of this international consortium founded by the Foundation for Food and Agriculture Research (FFAR) with the mission of accelerating global efforts to development of crops to meet the global demand for food in the next 20 to 50 years.

Researchers from higher education and research institutions in the State of São Paulo should develop projects according to one of the three areas proposed by the call: genomic resources and technological tools for new or underutilized crops; improvement of the functional and nutritional properties of plant-bases protein; and development of market analysis for new or underutilized crops.

Proposals must be submitted exclusively by the SAGe platform (www.fapesp.br/sage) until 24 January 2020. Previously, however, interested parties need to consult FAPESP about their eligibility until December 2, 2019.

In the call, the eligibility criteria will be defined according to the standards of the three funding modalities in which the proposals will be processed in FAPESP: Thematic Project, Young Investigator Grant and Research Partnership for Technological Innovation Program (PITE).

Proposals should be drafted in English. The involvement of international researchers in the proposal is desirable, but not mandatory.

The guidelines for the participation of researchers from the State of São Paulo are in www.fapesp.br/13693 (in Portuguese).