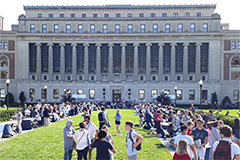 Researchers from Columbia University and from the Federal University of São Paulo will collaborate in the selected project (photo: Heitor Shimizu)

The São Paulo Research Foundation (FAPESP) and the National Institutes of Health (NIH) announce a research project selected under the cooperation agreement between the institutions.

The project will be conducted by researchers from Columbia University and from the Paulista Medical School / Federal University of São Paulo.

FAPESP and the National Institutes of Health (NIH) of the United States maintain a cooperation agreement to encourage joint research proposals submitted by researchers eligible by NIH regulations in collaboration with researchers from the State of São Paulo eligible by FAPESP’s regulations.

Areas of interest include those covered by the missions of the NIH centers and institutes participating in this collaborative opportunity (www.nih.gov/institutes-nih/list-nih-institutes-centers-offices). Under this agreement, proposals must be submitted in accordance with the dates

Presently, the agreement between FAPESP and NIH cover NIH’s grants of the type R01 and, on FAPESP’s side, Thematic grants.

More information about the agreement and how to submit proposals: www.fapesp.br/en/9258.