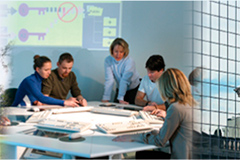 The opportunity fostered the organization of workshops in São Paulo State and in the Free State of Bavaria jointly written between researchers from both regions (photo: Baylat)

The São Paulo Research Foundation (FAPESP) announces the result of call for proposals promoted in partnership with the Bavarian State Ministry of Science and the Arts of the Free State of Bavaria (StMWK), a constituent state of the Federal Republic of Germany, represented in the context of the call by the Bavarian Academic Center for Latin America (BAYLAT).

The call was launched in August 2019 with the aim of supporting the organization of workshops gathering early-stage researchers and PhD students who are about to defend their thesis from Bavaria and the São Paulo State. FAPESP and BAYLAT selected one proposal.

The selected workshop will feature joint coordination by one principal investigator from São Paulo State and other from Bavaria. The team will organize the event in two distinct dates, meaning that the two meetings will be hosted by each respective state.