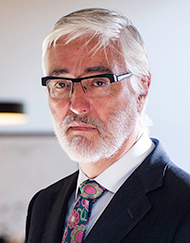 Luiz Eugênio Araújo de Moraes Mello graduated in Medicine from the Federal University of São Paulo (UNIFESP) in 1982. He has a master’s degree (1985) and a PhD in molecular biology (1988) from the same university. He attended the University of California, Los Angeles (UCLA) in the United States as a postdoctoral fellow in neurophysiology between 1988 and 1991. He earned a Habilitation in 1994 and a Full Professorship in Physiology in 1998.

Dr. Mello was a member of the Advisory Committee on Biophysics, Biochemistry, Pharmacology, Physiology and Neurosciences (CA-BF) to the Nacional Council for Scientific and Technological Development (CNPq) in 2000-03, and a member of an adjunct panel to FAPESP’s Scientific Directorate in 2003-06.

Dr. Mello is a board member of CNPq, the Brazilian Service of Support for Micro and Small Enterprises (SEBRAE), the Brazilian Center for Research in Energy and Materials (CNPEM), the D'Or Institute for Research and Education (IDOR), the Innovation Center at Fundação Getulio Vargas’s Business School (FGVIn), the Brazilian Lymphoma and Leukemia Association (ABRALE) and Tibet House Brazil. He is sector editor of the Brazilian Journal of Medical and Biological Research.

Formerly he was Pro-Rector for Undergraduate Studies at UNIFESP (2005-08), President of the Brazilian Federation on Experimental Biology Societies (FeSBE, 2007-11), a board member of the Brazilian Society for the Advancement of Science (SBPC, 2014-17) and Vice President of the National Association for Research and Development of Innovative Companies (ANPEI, 2016-18).

Dr. Mello is also a former Director of Technology and Innovation at Vale S.A., where he set up the Vale Technological Institute (2009-18), Head of R&D at IDOR (2018-20), and Head of UNIFESP’s Technological and Social Innovation Agency (AGITS, 2019-20). He specializes in neural plasticity, epilepsy, neurodegeneration, and S&T management.