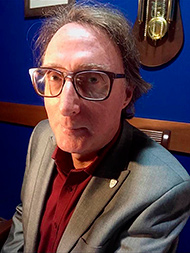 Richard Garratt trained as a biochemist at the University of London and has been on the academic staff of the São Carlos Institute of Physics since 1992. As a biological scientist by training, he is unusual in holding the position of full professor in a physics department. His post-graduate training was undertaken in crystallography and allied spectroscopic techniques at Birkbeck College in London during the ‘80s. He subsequently moved to the University of São Paulo in 1989 where he was instrumental in establishing the first protein crystallography laboratory in Brazil. He also actively participated in the proposal which led to the construction of the first protein crystallography synchrotron radiation beamline in the southern hemisphere.

His interests span many aspects of structural biology but principally the use of protein crystallography and homology modeling in the understanding of a wide range of biological phenomena at the molecular level. He has worked on glycolytic enzymes, superoxide dismutases and purine salvage enzymes from tropical parasites as well as on lectins, giant hemoglobins and more recently on septins. Furthermore, his interests in the teaching of structural biology have led to the development of pedagogical aids including unique physical cartoon-style models and a ‘periodic table’ of domain folds. His laboratory is the only Latin American participant within the International Network of Protein Engineering Centers (INPEC) and he represents Brazil within CeBEM (The Structural Biology Center of the Mercosul).