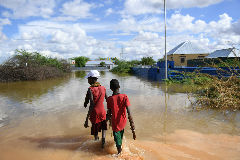 FAPESP announces the results of three calls for proposals launched under the agreement with Belmont Forum, a group of funding organizations committed to the advancement on global environmental change research.

These are the results of two calls launched in 2019 by the Belmont Forum, joined by FAPESP along with other agencies from several countries (“Disaster Risk, Reduction and Resilience (DR3)” and “Climate, Environment and Health“), and the call promoted by the international consortium in 2018 (“Transdisciplinary Research for Ocean Sustainability”).

Five projects have been selected, , and all of them were developed by a multidisciplinary team composed of researchers from three different countries at the least, represented by their respective funding agencies. FAPESP will provide resources for the investigators associated with research and higher education institutions from the state of São Paulo. The grants will follow the Regular Research Awards schemem with exceptions informed in each call for proposal. The selected projects, according to the respective Belmont Forum calls, are:

Released in May 2019, this call aimed to mitigate the risk of disasters and broadly improve society's resilience to extreme environmental events (natural or anthropogenic) that negatively impact the integrated human-nature system in its economic, social, and health and infrastructure dimensions. FAPESP takes part in two of the five selected international proposals:

The aim of this call, launched in April 2019, was to expand the current understanding of the connections between climate variability and formulate concrete actions to improve the population's health conditions and resilience of health systems to climate. FAPESP takes part in two of the nine selected international proposals:

In November 2018, this call was launched to foster innovative solutions to accelerate the sustainable use of the oceans and minimize the effects of global change. FAPESP takes part in one of the 13 selected international proposals: