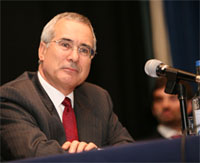 The international workshop “Evaluation of the Stern Review”, in the presence of Sir Nicholas Stern, first holder of IG Patel Chair in Economics at the London School of Economics and Political Science, took place on 3 November at FAPESP’s headquarters.

The English economics professor was chief economist and vice-president of the World Bank. The Stern Report, published in October 2006, describes the global climate changes as an economic externality and that the mitigation, or the development of technologies that emit less carbon, is the most suitable alternative for dealing with the problem.