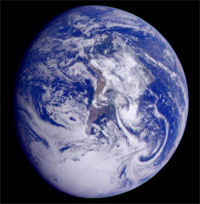 Throughout the world, researchers are studying the many variables involved in global climates changes, their causes and consequences, in addition to drawing up projections of future changes and creating mathematical models of the climatic system. In this way they try to establish possible scenarios and their impact on the natural systems and on the many aspects of life on Earth.

In Brazil, particularly, studies on climate change are tremendously important due to the great extension of the country, the significant interdependence of the base economy on renewable natural resources, and its vegetal cover, already greatly altered in the Biomas of the Atlantic Rainforest and Cerrado (tropical savanna) and in the rapid process of replacement in the Amazon Forest, where significant alterations in land use have been witnessed. To this should be added the increase in emissions, resulting from the burning of fossils fuels and agricultural and industrial processes.

In August 2008, the State of São Paulo Research Foundation (FAPESP) launched the FAPESP Program for Research on Global Climate Changes, with the objective of stimulating research on the theme, making the link between the variables resulting from human activity and those resulting from natural causes. Resources in the region of R$ 100 million have been allocated for this program over the next ten years.

However, even before the creation of this program, a large number of research projects into climate changes and variations have been undertaken over the years in the State of São Paulo, and continue to be undertaken, with support from FAPESP, from the National Council for Scientific and Technological Development (CNPq), and other brazilian and international funding agencies.

These research activities were and continue to be carried out within the ambit of specific programs – Biota-FAPESP Program, Large Scale Experiment on the Amazon Biosphere-Atmosphere (LBA) and the Amazon Environmental Modeling project (Geoma) – or in the form of hundreds of individual research projects.

This publication brings together information on 208 Thematic Projects and funding for Regular Research and 399 grants, in the different modalities, supported by FAPESP since 1992 up to July 2008. These research activities range from oceanography to agronomy, from physics to economics, from chemistry to meteorology, including biology and mathematics, among other areas. In isolation, each activity contributes to the advance in knowledge in its specialty. Viewed as an interconnected whole, they provide an important contribution to knowledge on the theme of climate changes.