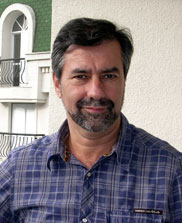 Dr. Artaxo Netto is a full professor in and head of the Applied Physics Department of the USP Institute of Physics. He works in the field of physics applied to environmental problems, focusing primarily on global climate change, the Amazon environment, physics of atmospheric aerosols, and urban air pollution.

Dr. Artaxo Netto is a full member of theBrazilianAcademyof Sciences, the coordinator of the Large-Scale Biosphere-Atmosphere Experiment in Amazônia, associated with the Millennium Institutes Project, and a member of the Intergovernmental Panel on Climate Change (IPCC), as well as a member of seven other international scientific panels.

In 2004, Dr. Artaxo Netto was recognized by the Brazilian Senate for his scientific research into the Amazon environment. In 2006, he was elected a Fellow of the American Association for the Advancement of Sciences. As a member of the IPCC, he was awarded the 2007 Nobel Peace Prize. In 2007, he won the Academy of Sciences for the Developing World Prize for Earth Sciences and received the Dorothy Stang Award from the São Paulo City Legislature.