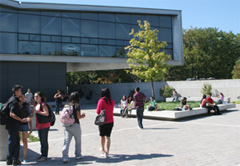 FAPESP, the Universities of Toronto and Western Ontario announce the results of their joint call for proposals issued in 2011 by the institutions.

Five proposals for the exchange of researchers were chosen to receive joint funding under an innovative research exchange agreement between the institutions.

The program awards successful Canadian applicants up to $10,000 CDN per year for two years to cover travel and living allowances in the State of São Paulo. Researchers associated with universities in São Paulo will receive the same amount to cover air travel to Canada plus health insurance and living expenses.

“The winning proposals bring together top scientists and researchers from São Paulo, Western University and the University of Toronto to work together on a diverse range of pressing scientific challenges. I am confident they will spark future collaboration and joint research opportunities,” said University of Toronto President David Naylor

Western Ontario University President Amit Chakma added that the Brazilian partnership provides an innovative model for international academic exchanges that can produce mutual benefits for both countries and beyond.

“The selected projects represent world-class research that will have higher impact and faster development because they join efforts by top-level researchers at Toronto, Western and in the State of São Paulo, Brazil,” said Prof. Brito Cruz, Scientific Director of FAPESP.