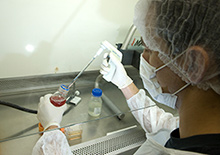 The São Paulo Research Foundation (FAPESP) and the Consejo Nacional de Investigaciones Científicas y Técnicas (CONICET), from Argentina, announced the result of a call for proposals for the support of collaborative research issued by the institutions.

The announcement was made in the closing session of the FAPESP Week Buenos Aires, organized in Argentina by FAPESP and the CONICET.

Three proposals of collaborative research between researchers from intitutions in Argentina and institutions in the State of São Paulo were selected.

The opportunity integrates the second call for proposals for SPRINT - São Paulo Researchers in International Collaboration, a strategy designed to encourage and promote the advancement of scientific research through the engagement of researchers affiliated with research institutions in the State of São Paulo with researcher partners abroad.

The call for proposals is available at: www.fapesp.br/8790.