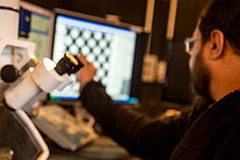 Funding agencies will jointly support collaborative projects between researchers in São Paulo and in the U.S. (photo: FAPESP)

The call for proposals is issued in coordination with the “Notice of Information from the NIH: Parallel Funding Initiative for Collaborative Research Between Investigators in the USA and in the State of São Paulo, Brazil”.

Proposals will be handled by FAPESP following the norms and regulations for Thematic Grants (https://fapesp.br/176) except when explicitly specified in the call for proposals guidelines.

The areas of interest include the mission areas of the participating NIH institutes and centers.

Applicants should send a summary of the proposed project (such as the abstract for the NIH application) to FAPESP and obtain a letter from FAPESP declaring their eligibility at least four weeks prior to submission of the application to NIH.

The application for the NIH must include information that the principal investigator from the State of São Paulo was considered eligible by FAPESP.

Proposals must be submitted in accordance with standard NIH receipt dates and procedures. Standard receipt dates for new grant applications are February 5, June 5, and October 5.

The call for proposals is published at: www.fapesp.br/10025