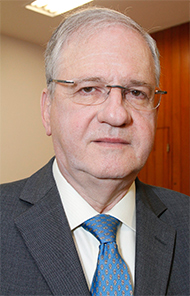 President - Board of Trustees

Graduate from the Medical School of Ribeirão Preto, University of São Paulo (USP), where he obtained the doctoral degree, followed by a postdoctoral training at Oxford University, UK. He was the President of the University of S. Paulo, Dean of Research of the same university, President of the National Council for Scientific and Technological Development (CNPq), and the Health Secretary of the State of Sao Paulo (2018).

He was the coordinator of a Cell Therapy Center, supported by FAPESP (2001 to 2015), the Clinical Director of the University Hospital of Ribeirão Preto and a member of the National Biosafety Commission (CTNBio).

His main research interests are the hereditary anemias, human population genetics, the molecular bases of malignancies and adult stem cells, especially hematopoietic and mesenchymal stem cells. He mentored more than 30 PhDs, masters and postdocs and edited the most widely used textbook of hematology in teaching health professions and specialists in Brazil. He has published more than 300 scientific articles referred in Web of Science. Research ID E-9442-2017.