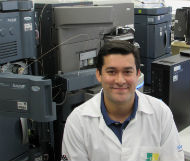 Daniel Martins-de-Souza obtained a BSc in Biology and a PhD in Biochemistry from the University of Campinas (UNICAMP). After that, he was a postdoctoral fellow at the Max Planck Institute of Psychiatry (Germany) and at the University of Cambridge (United Kingdom), where he headed the Mass Spectrometry Unit of the Cambridge Centre for Neuropsychiatric Research.Next, Daniel started the Neuroproteomics Unit of the Dept. of Psychiatry and Psychotherapy at Ludwig Maximilians University - LMU (Germany).

In 2014, Daniel returned to Brazil and founded the Laboratory of Neuroproteomics at Unicamp, funded by the São Paulo Research Foundation (FAPESP) via a Young Investigator Grant. Daniel's lab employs proteomic tools to investigate molecular mechanisms involved in psychiatric disorders and the identification of potential biomarkers. He is founding member of the Brazilian Society of Proteomics (BrProt) and part of the board of the Brazilian Society of Mass Spectrometry (BrMass). From 2015 to 2017, Daniel was also part of the board of the Human Proteome Organization (HUPO).

He presented his results in dozens of international meetings and symposia acting as a keynote speaker at major psychiatric (SIRS, ICOSR, ECSR, WFSBP) and proteomics/biochemistry (HUPO, HBPP, BrMass, BrProt, SBBq) conferences. He organized as Guest Editor special editions to major psychiatric/proteomics journals and also published his own books. Currently, he is the permanent editor of a book series (Springer-Nature); a member of the editorial boards of seven scientific journals; and the Associate Editor of a Nature journal (npj Schizophrenia). In 2016, was elected as an affiliated member of the Brazilian Academy of Sciences.