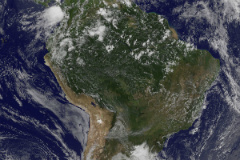 The São Paulo Research Foundation (FAPESP) reveals the result of call for proposals organized in partnership with the Natural Environment Research Council (NERC), the British research council for the field of environmental sciences.

The opportunity, launched last February, is one of the annual calls FAPESP and NERC promote together under the aegis of the cooperation agreement between FAPESP and UK Research and Innovation, the British government’s main science funding agency. FAPESP-NERC joint calls aim to foster cooperation in the fields of Earth science, marine science, freshwater biology, archeology, polar and atmospheric sciences, and Earth observation.

One proposal for scientific collaboration between a researcher from the state of São Paulo and another from the UK was selected. The project will be supported by FAPESP according to the guidelines of the Research Regular Grant scheme, excluding the exceptionalities pointed in the call.