FAPESP has been supporting research projects significant for the advancement of knowledge and technology in Bioenergy. For 45 years the foundation has fostered, through its several research support instruments, a large number of research projects in themes related to Energy and the Environment. Besides advancing fundamental and applied knowledge on Bioenergy, the FAPESP Research Programa on Bioenergy - BIOEN - aims at contributing decisively for the formation of scientific and technical personnel in the field of Bioenergy R&D.

Brazil stands out in the world as the country in which alternatives to oil for powering transportation are more intensely used. Sugarcane ethanol supplied, in 2006 (1), 13% of the energy for land transportation (excluding railroads) and 28% of the total liquid fuel energy consumption for Otto cycle engines, a percentage that has reached 51% in 1988. In the USA, the second largest world producer of ethanol (from corn) this percentage was 2.5% in 2004.

Brazil was the world's leading producer of Bio-ethanol until 2004, contributing slightly less than half the world's total, followed by the United States. Since 2005 the U.S. slightly surpassed Brazil's production. Together these two countries produce 70% of world ethanol. The European Union, with a production of almost 0.5 million-tons, is estimated to have produced about 10% of the world's total Bio-ethanol. Brazilian Bio-ethanol production costs are the lowest in the world.

Besides the lower production costs when compared, for example, with ethanol from corn in the United States, ethanol produced from sugarcane in Brazil has another important advantage: in Central-South Brazil only 1 unit of fossil energy is used for each 8-9 units of energy produced by ethanol from sugarcane. For corn ethanol in the United States this ratio does not exceed 1.8.

Carbon emissions reduction also benefits from ethanol: for each ethanol ton used as fuel, there is a saving of 2.5t of CO2 (2) not emitted to the atmosphere while, at the same time, no SO2 is emitted.

Sugarcane was introduced in Brazil in 1532. Since then the plant has been improved, based on the development of varieties of sugarcane that could maximize the amount of sucrose produced per hectare-year. This "Brazilian model" of producing concomitantly sugar and ethanol, brought important technical benefits and made possible an outstanding increase in the competitiveness in the international market for sugar and ethanol. Today about 50% of the sucrose of sugarcane produced in the country is directed to the production of sugar while another half is used to produce Ethanol, which is made with part of the extracted juice and the molasses resulting from the manufacture of the sugar.

Ethanol has excellent chances to become a worldwide replacement or complement for gasoline. The recent increase of oil prices and the impending limitations in world oil reserves and production made Brazilian ethanol very competitive. On top of this, ethanol from sugarcane has substantial advantage in that it generates eight times more energy than the energy of fossil origin necessary to produce it, bringing a relevant saving of carbon emissions.

The world gasoline market was about 1.47 trillions of liters in 2005 [British Petroleum Statistical Review of World Energy - 2005; www.bp.com/statisticalreview]; so that to satisfy a demand of 10% of this it would be necessary to produce about 160 billion liters of fuel ethanol, amounting to 10 times the current Brazilian production.

Today, only one third of the available energy in sugarcane, which is stored in sucrose, is effectively used to advantage in the production of sugar and ethanol. The stalks - approximately 1/3 of the cane energy - are burnt, with low energetic efficiency, to fuel the process of sugar or ethanol fabrication. The last third, composed of leaves and other cellulosic materials, is - as it is now - useless, because of the harvesting fire which wastes the trash, composed by tops and leaves.

Emerging technologies, such as hydrolysis, will allow the fabrication of ethanol from cellulosic material. While today the production costs are non-competitive, if R&D finds a way to lower them, using the two thirds cellulosic material to generate ethanol might improve dramatically the Brazilian ethanol production.

Considering the existing opportunities related to biofuels, it makes sense to use R&D about the sugarcane plant to optimize not the sucrose content, which is relevant for sugar production, but the energy content, considering that there is energy in the sucrose and that there is also a relevant and extractable amount of energy in the cellulose which forms close to 2/3 of the sugarcane plant. This plant would actually be an "energy-cane" instead of a "sugar-cane".

In the new paradigm, of "energy-cane" and not "sugarcane", one would collect the trash (optimization in the harvesting process) in order to improve the use of the bagasse. Developed hydrolysis and/or the gasification processes could be applied to the residual bagasse and trash, transforming this cellulosic biomass into ethanol or other fuels, using fermentation of the generated sugar (hydrolysis) or the catalytic synthesis of the generated gas (gasification). The production of ethanol might increase from the current 6,000 to about 9,000 liters per hectare-year.

Rising oil costs will also push the petrochemical industry towards substituting oil for ethanol as an input. The increase in world demand for ethanol will bring an increase of the sugar-cane planted area in Brazil and more R&D will be necessary to evaluate and predict the environmental and social impacts.

Given these opportunities and challenges, it is necessary for Brazil and for Sâo Paulo to intensify the R&D activities related to the production of ethanol from sugarcane. Relevant themes are: improvements in the sugarcane plant, improvements in the farming and harvesting of cane, the industrial processes to produce ethanol from cane, the use of ethanol as input in petrochemical industry, thus turning it into alcohol-chemical industry. With respect to the application of ethanol as a vehicular fuel, relevant themes are: optimized flex-fuel (ethanol-gasoline) engines, and given the world advances, to study the ethanol use in Homogeneous Charge Compression Ignition (HCCI) engines and as Hydrogen storage for fuel cells. Finally, considering the possible impacts of the increase in the demand of ethanol in Brazil it is important to foster research on social, environmental and economic aspects of the ethanol sector.

Together with the recent increase in interest, the sector is facing a paradigm change based on a new set of still non-commercial technologies, of which hydrolysis of cellulosic biomass is an important example. This situation evidences the necessity of an articulated national effort, with the participation of the scientific and technological community in academia and in industry, to guarantee the maintenance of Brazil's leadership role in the sugar and ethanol production. 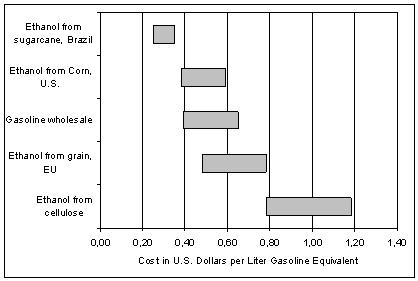 Production costs, though still favoring the Brazilian model, are progressively being eroded when compared, for example, with large scale maize ethanol production in the USA (Figure 1), even though these costs are affected by intense government subsidizing in the USA.

There is much to be gained in from scientific and technological efforts for ethanol in Brazil, but in order to maintain the leadership in sugarcane and ethanol production costs Brazil needs to intensify its R&D activities.

In this Call for Research Proposals only proposals related to the Biomass to Energy, Biofuels Fabrication Processes and Broad Impacts Divisions are invited.

The FAPESP Program for Research on Ethanol has a solid core for supporting academic exploratory research related to these topics. It is expected that these exploratory activities will generate new knowledge and form scientists and professionals essential for advancing industry capacity in ethanol related technologies.

On top of this, the FAPESP Program for Research on Ethanol establishes partnerships with industry for cooperative R&D activities between industrial laboratories and academic laboratories at universities and research institutes, which are to be co-funded by FAPESP and industry. For theses collaborations the details for each theme are specified according to the interest of the private partners and to FAPESP commitment to fostering research in the state of São Paulo. Other research agencies from federal and other state governments were invited to participate in the FAPESP's BIOEN Program: the Ministry for Science and Technology, through CNPq, and FAPEMIG declared its interest and other agencies are studying their commitment.

2) Relevant topics for this call for research proposals

The BIOEN Program will have other calls for grant applications in order to complement its research objectives and broaden its research topics.

2.1) Research on Biomass to Bioenergy

2.3) Research on Social, Economic and Environmental Impacts of Biofuels

For the Young Investigator Award proposals FAPESP will accept proposals of researchers which might not yet have a professional association to higher education or research institutions in São Paulo. However, only proposals that find such an association will be granted.

FAPESP may associate to this CFP research proposals that are under evaluation if the applicant submits a request.

The main goal of this call for research proposals is to identify, select and broaden world-class, basic and applied, research associated to the topics described in the Section 2.

The application requirements of this call for research proposals will be followed rigorously. Please, read them carefully. Applications that fail to comply with these requirements will not be considered.

6) Characteristics of the research proposals

The grant applications should target some or all of the following research goals:

7) Benefits and obligations specific to the BIOEN Program

7.1) Attendance on BIOEN Program Workshops
The BIOEN Program will have periodic workshops with mandatory attendance for all the PI's involved with the program and, in some cases, their collaborators and students. These Workshops will be a special opportunity to be updated about the research conducted in the field and to have access to new data and information before they are published.

8) Funds available for this Call for Research Proposals

a) The total amount of resources available for the grants selected by this call for research proposals is 10 million Reais (approximately equivalent to US$ 6 million).
b) The appropriateness of the requested funding amount in relation to the proposal goals and qualification of the proposing team is a primary review consideration.
c) FAPESP reserves the right to propose lower funding levels for some of the proposals.

The following items that can be included in the budget:

FAPESP will communicate CNPq of all intellectual property registration or resources generated by the selected applications. A summary of these rules are:

12) Communications regarding this call for research proposals

The applications must be submitted to FAPESP through the following address:

Please, send all queries about this call for research proposals to chamada_bioen_b_fapesp@fapesp.br. In order to make the response faster, please use "BIOEN/FAPESP call" as the email subject.

Queries for this call for research grant proposals will be dealt by:

All the applications that are eligible to this call for grant proposals will be reviewed in two steps:

13.1) Adequacy to the BIOEN Program

13.2) Review of the grant applications considered adequate by the BIOEN Program

The merit of each application will be reviewed in sessions of comparative analysis. These sessions will use peer review reports from ad-hoc reviewers from FAPESPÂ´s Assistant and Subject Coordination following the selection criteria used in applications in regular Research Awards or Young Researcher Awards.
The researchers that apply for grants in this call will not be part of the selection and review process.
All the applications will be analyzed using the following criteria, in addition to the criteria specific to the regular Research Awards or Young Researcher Awards:

The applications may be submitted following two different schedules:

The total amount of funds for this schedule is R$ 5 millions Brazilian Reals.

The total amount of funds for this schedule is R$ 5 millions Brazilian Reals.

Final results will be published at FAPESP website (www.fapesp.br), and through direct communication with the parts.

If the application is approved, a Grant Contract will be made, which will be signed by the Head Researcher and the Institution representative.

The results will be evaluated by progress reports and financial reports that should be submitted in the dates established in the Grant Contract.

The grant may be cancelled by FAPESP if a significant event justifies its cancellation in the opinion of FAPESP Scientific Management without reducing the possibility of other sanctions.