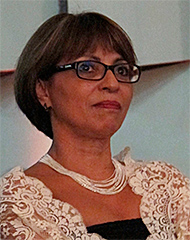 Fellow of the Royal Society of Chemistry (UK), member of the Brazilian Academy of Science (ABC) and São Paulo Academy of Science (ACIESP), is also Science Productivity CNPq Fellow level 1A, and has received several awards, highlighting most recent: 2014 CAPES-Elsevier Award for the contributions to science in Brazil, Distinguished Woman in Science Chemistry and Chemical Engineering, conceived by ACS & IUPAC (2011); Simão Mathias Medal, the highest honor conferred by Brazilian Chemical Society (2011).

With Ph.D. in Organic Chemistry, under guidance of Professor Otto Richard Gottlieb, at University of São Paulo, in 1990 she was awarded with a fellowship from DAAD for a short training at University of Hannover. After a post-doctorate at Virginia Polytechnic Institute (VPISU-USA) under guidance of Professor David Kingston, she joined to the São Paulo State University (UNESP), and since 2003, is member of the Biota-FAPESP Program Coordination.

Her field of interest is plant science, and has been involved in the isolation, bioactivity and function of secondary metabolites and peptides from plants, and recently has been involved on metabolomics and medicinal chemistry.